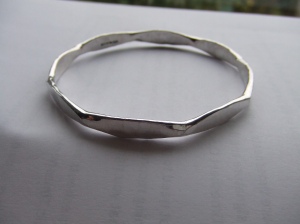 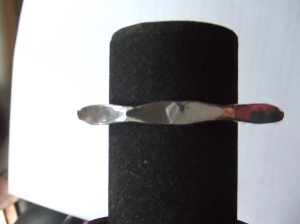 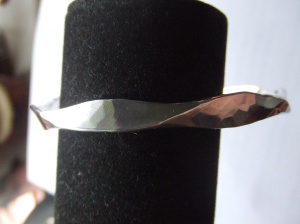 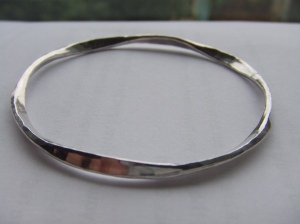 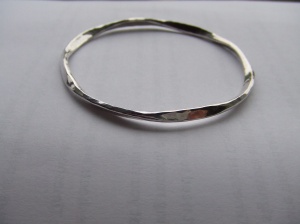 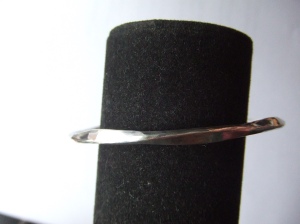 As you know I am a huge fan of chasing and repousse´, given the opportunity, would do little else. The cold fact is, in no small part due to the time it takes to complete a piece, I am struggling to…. No lets tell it as it is, I can’t sell anything at this time. I feel sure I have put the cart before the horse, so to speak, concentrating on this type of work without a reputation and grounding that comes about by making and selling more mainstream and faster to create work.

My earliest introduction to metalwork was whilst I was still at school, my less than possitive experience made me not a huge fan of this institution. I found the majority of my educators not warming to a child who sought validation and further explanation rather than accepting what is told. I was not inclined to get on with what was set without question, many teachers were seemingly not comfortable outside of their scripts. This clash of ideals inevitably leading to me to be farmed out to the more practical parts of the schools I attended. I had a great careers officer in my last who knew of a farrier and gave me the chance to do work experience. Revelation, freed from people who talk, to experiencing first hand craftsmen who do. It was a huge thrill for me and, fair to say has been the biggest influence upon my attitude to work that I can think of. It has, albeit indirectly, led me to the point I find myself now. Namely the wish to be a craftsperson, rather than a desk jockey.

I loved making horse shoes, forming shapes and objects like toasting forks from old worn out shoes. Now that I have a better understanding of what is likely to sell, I have decided to resurrect the joy of forging to make it far more prominent in my repertoire for the coming year.

Living by the sea and understanding customers wish to relate to work, I have come up with the wave bangle. Bit of a challenge to photograph, I will, providing I can sell enough to warrant it, return to Paul Mountsy photography who will be better able to highlight the effect, hopefully in the near future.

I continued forging all the way over and created the faceted one also, this was the result of a successful experiment whilst shaping stakes to make the wave.

Coming soon I will post pictures of two copper leaf brooches, along with abridged construction photographs. I am trying to gain a greater influence by nature and shapes formed as a result of movement. This movement, albeit fleeting, as in the patterns in flowing water, to the more solid and slower creations, say in the bark or grain of wood, to name but two. Man cannot live by his own vision alone, unless it is shared by others of course.  As mine isn’t, its time for me to look seriously at what others like, rather than just hope eh. Be careful what you wish for. At the start of my making journey I was very keen to connect with people on an individual level. I come to realise that however much people say they want something different, it still has to conform, be safe if you like, to associate with something more mainstream. Lesson learned. I said I didn’t want to make jewellery for everyone. What I didn’t expect, or want, was that so few associate with it that it became a curiosity, seen as something perhaps clever, well made even, though not desirable. I love to explore new possibilities, and will continue to do so. I thought of an example of how I feel this process has crept up on me, the following is a kind of analogy to better explain it as I see it.

Near where I live is a beautiful place called St. Agnes. On favourable days it attracts hang gliders and paragliders. When the sky is clear and the sea is welcoming people will notice from the road the sight of the colourful sails as they play on the natural thermals and updrafts from the sea. Curious onlookers will drive down to get a closer look, some even have picnics and make a day of it with the children. On summer days holidaymakers will swell the numbers, cameras scanning the skyline capturing the action. As I walk around the people gathered, all shapes and sizes, ages and creeds. The one thing that I notice is the common response that even will induce strangers to talk to one another, united in their assertions that, fantastic though it is, ‘there is no way you would get me up there on one of those things.’ Another topic of conversation that I have noticed strangers talk about, after where are you from, what do you do is, where did you go on holiday last. The result will often be far flung destinations that will involve flying.

Whats my point? Well, as I see it, people are generally not afraid of flying. Even if they are mildly so, they will control it, looking to the goal of the beautiful destination they have saved hard for all year to reach. How they fly is important, they don’t necessarily wish to enjoy the flying experience, just the getting there. Think – must have a diamond solitaire for example. It’s not the ring, but what it represents that appears to be important. The design is a classic, a must have to be ticked off of life’s check list. The piece is invariably judged by the size and sparkle of the stone, the setting being largely ignored.

This is a long winded way of saying I need to be in contact with more lovers of flying if you will, as opposed to destination seekers. My narrow focus on making at the expense of design has led me to a point where I am not able to find a sympathetic audience for my work. All is not lost, I hope the wire bangles will be the start of more mainstream work that will enable me to continue making, whilst searching for outlets that attract people who really do want something different.

I do find myself drawn more to vessels, so 2014 will see me exploring more possibilities for these, both chased and plain alongside, hopefully

a more commercially acceptable line of jewellery to help fund it

All my very best wishes for the coming new year.